Sh*t’s getting real, folks. My marathon training plan is 18 weeks. You’ll notice this is the recap of week 15. That means I have two more weekend runs and then it’s race day.
I am freaking out.
Week 15 went well, for the most part. I was training in warm and sunny Phoenix, AZ, which definitely helped with the motivation. But it was also kinda hot, which made running a little difficult. Check out my week below!
Monday — 5 Miles
Since I did my long run on Friday before traveling to AZ, I ended up running with my sister-in-law for 2 miles on Monday, and was then joined by my husband for the last few miles. We headed out around 8:30 am but it was already pretty toasty in the sun. I loved it. I was hot as heck and it made for a somewhat difficult run, but a nice change from our chilly temps in NE Ohio.
Tuesday — 5 Miles
This was my favorite run I’ve had in a while. I wore shorts and a tank, tested out my hydration vest, and ran loops in the early morning sunshine while my kiddos played on the nearby playground. Running loops was a little redundant and I didn’t love solely running on concrete sidewalks, but the views. The sun! The lack of cars. All of it was just great.

Wednesday — 0 Miles
I missed a 5-miler last week. I got hit with a pretty vivacious cold bug, and got knocked out with a fever. I couldn’t run even if I wanted to. In fact, I spent the entire day in bed. Boo hoo.
Saturday — 20 Miles
Still recovering from my cold but feeling much better, I hit the trails with Julie.
20 miles was tough. I was am still recovering from my cold. I was jet lagged. I was carrying 85 gagillion pounds of water on my back. My energy was nowhere near where it should have been. I was complaining from the start. I just felt like I was dragging booty. But, as the run continued, I felt better.
Within our first four miles Julie spotted a bald eagle. It was majestic.

See the black blob in the trees? That’s the eagle. Moments later it flew off and had the most enormous wing span I have seen. Just beautiful.

Confession: I wasn’t sure the bald eagle had been removed from the endangered species list. (Which happened in 2007. Yes, I live under a rock.) But in all reality, I hadn’t seen or even really discussed bald eagles since I was a camper back in the 90s (ack, I’m old!) so it’s not my fault for not knowing. There. Nah nah nah boo boo.

Anywho…
After the bald eagle sighting, we ran along trails, under bridges, over streams, and on to the road.

When we got to mile 10, we looked at each other in disbelief. The look? It questioned, “did we really just run 10 miles and it felt like nothing?” The answer: yes. We made a quick phone call to our friend, David, to ask him to meet us at mile 14 with pizza and to run with us the remaining 6 miles. He didn’t go for it. We got to mile 14. There was no pizza.
Before we got to mile 14, though, we must have been around mile 13 or so when I started hallucinating that I was seeing a bear standing on its hind legs just up ahead of us on the road. Oddly enough, there was a woman running toward the bear. The bear didn’t move. And the lady didn’t run away shrieking. I caught up to Julie and told her I had just hallucinated about a bear. She said, “you mean the fence?” Yes, of course I mean the fence… I didn’t feel crazy for long, though. Apparently she was hallucinating, too. She saw a rainbow and thought I was telling her I saw it as well. 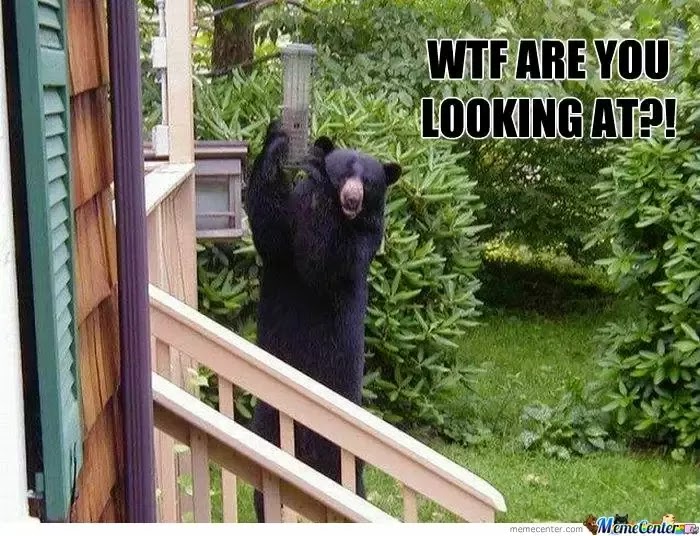 Time for food.
We continued on our way. My music malfunctioned a few times, and I felt like I wasn’t taking in enough fluid a couple times as well. I started running with my hydration vest hose in my mouth. I must have looked something fierce. #likeagirl
Around mile 15 we ran a quick trail loop and had an exceptional photo opp, as you can clearly see here:

Sitting stern in that canoe brought back so many awesome memories. I can’t wait for warmer weather. I’m taking my family out to the wilderness this summer. They don’t even know what they’re in for. It’s going to be fantastic. Maybe we’ll see more bears. (Ha ha?)
The final leg of our run was on the trail. My legs felt like lead. My pack was considerably lighter so that was helpful, but my stomach was done with the running, as were my knees. Looking back on it, I know my mistakes in this run and I wasn’t too sore or out of commission to function later that day or on Sunday, so I suppose that’s something. But I do worry just a little bit about the final 10K at the end of my 20-miler on May 17th… For whatever it’s worth, my legs didn’t hurt anywhere near as much as they did after the 20-Mile Drop.
When we got to my car, we both sat on the ground in the middle of the parking lot eating our snacks and resting our tired legs.

On the way home we decided to hit up our local Fleet Feet for some fuel for the following weeks. I might have mentioned my legs hurting a few times while we were there. And I only really know that because the guy at the counter said, “yeah, you’ve mentioned that a few times…” Oops. Ah, well, this is what he gets paid for! To listen to war stories and complaints about tired legs! Oh yeah, and I guess to sell shoes, too.
I would like to mention this for good measure in case any running store owners are reading my blog: it is my firm belief that running stores should carry Epsom salts. That is all.
Since I was clearly having a hankering for pizza, I requested my husband go to not one, but two different restaurants for dinner. First stop — for a giant awesome salad. Second stop — for two giant awesome pizzas. I stuffed my face. It was amazing. I have the best husband in the world. He did something like this for me when I was pregnant once. In fact, it was to get me a dinner salad at the same restaurant. Love that guy.

Overall, week 15 was great. Despite the fever and the 20-miles… 🙂
Next two weeks are taper weeks and then it’s time for the big dance.
Squeeeeeeeeeee!!!!!! (This is nervousness, not excitement…)
Happy day, friends!
xo
Tell me… have you run a marathon? Do you have any tips for this newbie?

Man, look at you go! I'm inspired by how you can do so much, eat so well (thought that pizza looks good), and push yourself towards your goals. Thanks for sharing!

Thank you so much!

What Hydration Option Should I Buy? A Runner's Guide to Packs, Vests, Belts, and Bottles Reply

[…] did it’s job when I needed it most. I wore it through some tough training runs for the 2015 Cleveland Marathon. Unfortunately the bladder system isn’t necessarily my cup of tea. I have a hard time with […]

This site uses Akismet to reduce spam. Learn how your comment data is processed.